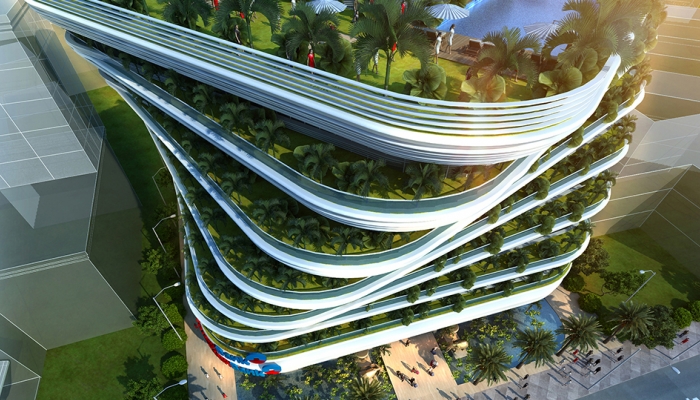 A five star hotel in Vientiane, Capital of Laos PDR. The site area is 3,500 sqm with a height restriction of below 40m. The Client emphasizes to have an iconic building with luxury design. This hotel will host all important events between Vietnam and Laos government and will be a place where cultures of the two countries are broadcasted to the world.

Taking the brief from the Client, MPN + PARTNERS started with our 'Design for People' philosophy like other projects. The challenge of this project was how to socially and culturally fit a modern iconic architecture into a French colonial combined with Laos conventional temple pointed roof.

The Design began with a series of researches of Culture, Traditional Architecture and Monumental buildings around the area. In parallel, massing studies were carried out with 15 options to study about the form of the building that how it would relate to the surrounding together with budget rough calculation. Sustainability approach was also looked at. The options were presented to the Client and reduced down to 3 most potential options. The ideas of having frequent meetings with the Client was to bring them into the design process and be part of it. Their input would be way valuable and it helped them feel comfortable from the start.

The final option was chosen based on the analysis of orientation, view value, of energy saving by using energy model, of cost and of how it would fit to the society even its form stands out.

The site was a square site. Therefore the idea of having an atrium in the middle of the floors was to have rooms along this atrium to get natural light during the day. Also the atrium helped the whole building ventilate naturally most of the time. The floors were twisted around its atrium. Rooms adjacent to the external facades then increased their value by having different view angles and balconies for plants. The green belt of the Street was like wrapping around the building while twisting. Up to the roof, where all recreations were placed with a lot of trees and green grass areas for visitors to enjoy their time. The twisting form also represented the fast-growing development of the Vietnamese Client on Laos soil. The podium was formed by diagonal structural columns which reflected the modern image of Laotian pointed roof.

The interior was designed to reflect the cultures of both countries. At the heart of the building, lit by the atrium natural light placed the Reception monument. This reception was designed to make the building only fit in Laos and reflect Laotian culture with the popular traditional gold color and the temple pointed roof. The Vietnamese image was brought in by having a Lotus pond wrapping around the Reception monument. Guests could access the reception counter on every side. At the main Entrance, there were two rows of statues on both sides of the entrance, each side has a statue of an elephant (the image of Laos, the country of million elephants) and a statue of a Bronze Drum (the image of Vietnam).